The park is a non-profit funded solely by donations from dog-owners like you.

EVERY DOLLAR MAKES A DIFFERENCE

As shared at earlier community meetings, the temporary Shaw Dog Park will close this Monday, January 18, as work continues on the new Banneker High School. However, we are excited to announce that the NEW dog park will open in August 2021, alongside a new skate park! We know you will miss having a nearby space to let your dog play but a new, renovated park will be back for you and your dogs later this year. To view current plans and for updates, visit https://shawdogpark.splashthat.com/. We look forward to seeing you in the future and will share more information as it becomes available.

WHAT: Virtual meeting with DC Department of Parks and Recreation (DPR) to hear updated plans on the Shaw Dog Park Renovation Project.

WHY: Learn more about the timeline and plans to renovate the full Shaw Dog Park at 11th and R Street NW, give input and make sure your voice is heard!

Want to learn more about the future of the Shaw Dog Park and have your voice heard? Join ‪Wednesday, September 30 at 6:30 p.m. for a virtual community meeting hosted by the DC Department of Parks and Recreation. We will hear updates on the Banneker High School construction and give feedback on updates to the dog park. Your voice, advocacy and support for a safe park is needed!

To review current plans and for viewing information, visit ShawDogPark.splashthat.com.

Per the announcement by Mayor Bowser on May 27, DC dog parks will be reopening on May 29. We’ve missed seeing everyone’s four-legged quarantine buddies, and are excited for when the city can soon unlock the park gate! However, a safe reopening and return to a “new normal” starts with responsible practices from all of us. It is important to continue following safe social distancing and other measures. Guidance from DC Health reminds dog park visitors to:

As a reminder, we now have a temporary dog park at 11th and Rhode Island, NW, during the Banneker High School Renovation Project (next to the skate park).

Thanks for continuing to be responsible during Phase 1 reopening.

As of April 1, the D.C. Department of Parks & Recreation (DPR) has closed all dog parks as part of the coronavirus emergency response. Please enjoy this time with your pets and make sure you both receive plenty of exercise!

Starting this Wednesday, April 1st, Shaw Dog Park will be closed for the duration of the Banneker High School Modernization Project. ⁣⁣We want to thank every one of you who helped us reach out to leaders in our community and the Department of Parks and Recreation.

Thanks to our collective voice, we have been able to secure a temporary park location adjacent to the skate park and basketball courts. We know that there is still more work to be done, so we will continue to call on the Shaw Dog Park community to help make our needs heard and met.⁣⁣

We will miss our park for now, but can’t wait for fun times to come just a few hundred feet away!

Thank you to everyone who helped share your voice and concerns with DC Department of Parks and Recreation (DPR)! The agency informed us yesterday, March 6, that they will have a temporary dog park set up at the corner of Rhode Island and Q, NW (south of the skateboard park). That park will be ready for use starting April 1. We are told this park will have appropriate fencing and a double gate. They are still anticipating a Fall 2021 re-opening of the Shaw Dog Park at 11th and R NW.

DPR has also indicated they will reach out to the community before the end of the month to schedule a community meeting to discuss improvements to the existing dog park, as well details about the temporary park.

Thank you to everyone who reached out – your voice was heard and you made a difference! Your outreach absolutely helps to demonstrate the value of the Shaw Dog Park to the community. We also want to thank DPR for their responsiveness in the last few days.

There is no doubt that we can count this as a victory, but there is more work to do! We ask all of you to stay plugged in to our updates as this project progresses. If this can be a transparent and collaborative process, we will be able to contribute to the creation of new and wonderful amenities in our neighborhood, and advance generational green space improvements that will be enjoyed for many years to come!

We will keep you informed as we learn more and when we need your help going forward.

Many of you may have been surprised by the announcement by the Department of Parks and Recreation (DPR) that the Shaw Dog Park will be closing on April 1 for at least a year. The Volunteer Board of the Shaw Dog Park was shocked when that information was first shared with us the day before our February 20 Annual Meeting.

We have pushed back in an attempt to get a phased closure of the dog park, but have been told that is not possible. However, that does not mean we do not have work to do to ensure our voices are heard!

We are requesting a temporary location be established nearby during the construction. We have also requested the long promised meeting where the community can give feedback on the design of the Dog Park, Rec Space, Skate Park and Basketball Courts.

We encourage you to reach out to DPR – specifically Tommie Jones (Tommie.jones@dc.gov) to ask him the following:

·         Shaw Dog Park receives contradictory information and broken promises about the park’s future. Why does information constantly change and why is it not communicated clearly? In addition, why did DPR wait so long to inform the users of the Shaw Dog Park about a total closure that could last longer than a year?

·         Is DPR going to find a temporary location for the users of the Dog Park? Where and when will it be open?

We are also working with ANC Commissioners John Fanning and Alex Padro to see if the ANCs can put forth a resolution to ensure a temporary location is found and secured. Additionally Councilman Charles Allen’s office has offered to continue to stay engaged and help facilitate action on our behalf. We would encourage you to copy the ANC Commissioners and Councilman Allen on your communication. John Fanning, 2F04.ANC@dc.gov Alex Padro Alexander, 6E01@anc.dc.gov Councilman Charles Allen, callen@dccouncil.us.

We need you to make sure DPR knows how many people there are in our city that care about the Dog Park – if you want to ensure we get the space now and in the future do not stand by – MAKE YOUR VOICES HEARD!

It was a busy year for both the park and everyone concerned about the shared community space on 11th Street! Your voice will be important as we continue to advocate for the dog park in 2020 and work to maintain a valuable, community-run park for DC dog owners. Thank you to all of our volunteers who help to keep Shaw Dog Park a safe and enjoyable space for all! 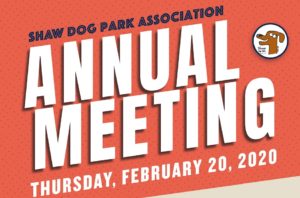 There are no upcoming events.

We need volunteers!
If you're interested in helping to maintain and run the park please send us an email.